Engineered for enthusiasts seeking maximum protection and performance. Precision-formulated with cutting-edge technology and a longstanding devotion to making the world's best motor oil. The result: engine protection that blows the doors off the highest industry standards. • 50% more cleaning power vs. AMSOIL OE Motor Oil • Ideal for turbos & direct injection • Guaranteed protection for up to 25,000 miles or 1 year

Protects Against Engine Wear AMSOIL Signature Series Synthetic Motor Oil develops a strong fluid film that keeps metal surfaces separated while its robust anti-wear additives further reduce wear in metal-to-metal contact regions for maximum engine life. The Sequence IVA Engine Test, which must be passed to meet the industry-standard API SN specification, simulates extended periods of stop-and-go driving. For 100 hours, the test engine cycles between 50 minutes of idling and 10 minutes of elevated rpm – conditions that encourage engine wear. The camshaft is then measured for wear in 84 locations and an average score is determined. We used Signature Series 0W-20, the lightest viscosity in the line, to further increase the severity of the test. AMSOIL Signature Series Synthetic Motor Oil provided 75 percent more engine protection against horsepower loss and wear1 than required by the industry standard, extending the life of vital components like pistons and cams.

1Based on independent testing of AMSOIL Signatur e Series 0W-20, in ASTM D6891 as required by the API SN specification.

Extends Drains: Protection Guaranteed AMSOIL Signature Series Synthetic Motor Oil provides reserve protection, allowing you to go longer between oil changes if you choose – up to 25,000 miles, 700 hours of operation or one year, whichever comes first*. Our unique synthetic formulation and long-drain additive system are inherently stable to resist oxidation and neutralize acids over longer periods. Signature Series is designed to deliver outstanding engine protection, cleanliness and performance over extended drain intervals – guaranteed. It provides peace of mind so you can fit oil changes into your schedule.

Preserves Horsepower The extreme durability of Signature Series Motor Oil ensures your engine runs stronger, for longer. We installed Signature Series 5W-30 Synthetic Motor Oil in a Ford* F-150 with a new 3.5L Ecoboost engine to test its ability to protect turbocharged direct-injection (TDGI) engines from torque and horsepower loss during extended drain intervals up to 25,000 miles. Power sweeps were done at the beginning and end of the test to evaluate horsepower and torque retention. As the graph shows, Signature Series helped maintain engine performance throughout the100,000 mile test.

Limits Oil Consumption Signature Series has a uniform molecular structure that limits evaporation and keeps it where it's needed most – protecting your engine. Volatility (burn-off) occurs when oil gets hot, causing lighter molecules to burn off or evaporate. This leads to oil thickening, additive imbalance, higher emissions and oil consumption. The NOACK Volatility test is the industry standard for evaluating motor oilhigh temperature evaporation. It measures the percentage of burn-off after a motor oil is placed under constant airflow at 482ºF for 1 hour. A lower number indicates a better resistance to evaporation. Signature Series falls far below the API limit for volatility, reducing the need for frequent oil top-offs and limiting vehicle emissions.

1 Based on proposed ILSAC GF-5 Plus specification. * All trademarked names and images are the property of their respective owners and may be registered marks in some countries. No affiliation or endorsement claim, express or implied, is made by their use. All products advertised here are developed by AMSOIL for use in the applications shown. 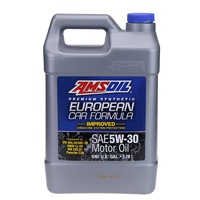